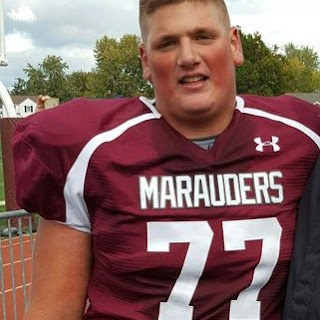 Tyler Doty is a Gasport resident who is a senior at St. Joseph's Collegiate Institute. He recently won the Trench Award as WNY's best lineman. This week he received yet another football honor. Tyler was named to the ALL-USA New York football first team by USA Today Sports. That is a HUGE honor -- he's attracting the attention of football experts from all across the country. Tyler recently signed his letter of intent, declaring his commitment to the D1 program at the University at Buffalo. A big congrats to Tyler on his continued awesomeness on and off the gridiron. You can see the full list of USA Today honorees here: https://usatodayhss.com/2018/2018-all-usa-new-york-football-team

January: Dr. Henry Stopinski was selected as the new superintendent of schools for Royalton-Hartland.

February: Gasport's Debbie Brown became the first layperson installed as pastoral administrator in the Diocese of Buffalo....the Buffalo News ran a special Sunday article about the paintings of the late Ruthven Kill who painted local scenes

March: The school district's play was Cinderella...Police Chief John Swick celebrated 40 years serving the village of Middleport...Becca's Closet, a mission arm of Zion Lutheran Church that gives prom dresses to girls in need, was featured on WGRZ...Roy-Hart's focus wasn't a walkout on March 14th for the national walkout for school safety. Instead, a ceremony was held indoors where students were challenged to deliver 17 acts of kindness.

April: Graestone Manor on Root Road opened as a bead & breakfast and a site for ghost tours

May: Hartland Bible Church began a partnership with the Gasport Elementary PTA and others to start a community garden, with vegetables raised by the elementary school students...Geraldo Rivera passed through town on his trip along the Erie Canal...the school district launched the Roy-Hart 2028 initiative.

June: A scientific study undertaken in 2017 about the microbes in Gasport's gas was released...more scientists visited Gasport, this time to study the methane in the gas...in the annual Business First study, Royalton-Hartland was ranked 58 of 104 public school districts and private schools, up 7 places from 65th last year....Roy-Hart Baseball made it all the way to the Class B State semifinal game...the Salt and Light Festival took place

August: Roy-Hart created a Dean of Students position....Gasport View Dairy was interviewed by Bob Lonsberry for WSYR during the State Fair...Flint Veterinary Care Center opened on Main Street...Madeline Keyes who, along with her horse Classic Circle, became a AQHA youth world champion

September: The 13th annual Saddle Up For Roswell took place

November: It was announced that middle school principal Mr. Fisgus was moving on to be the superintendent at Oakfield-Alabama...the 12th annual Mitten Tree benefited local kids in need....Niagara Kraze announced they are building an entertainment center in Gasport...a $3,000 grant from the Cornell Cooperative Extension brought a breakfast cart toRoy-Hart 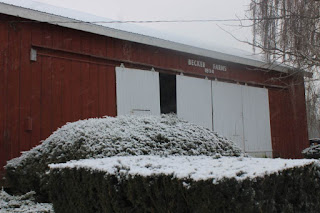 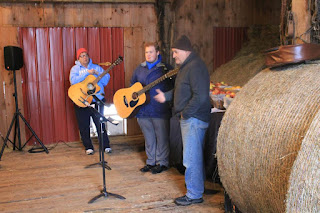 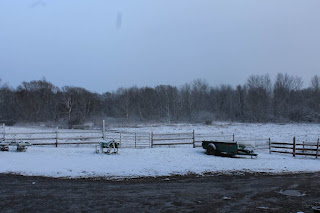 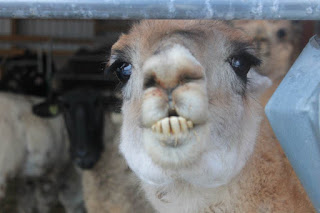 All the kids (and kids-at-heart) were hoping for a white Christmas. Then, a random mass of lake effect snow from Lake Superior -- that hadn't been forecast for us -- dropped south into Gasport...just in time for the Christmas Eve service in the old barn at Becker Farms. Thank you to Oscar and Mindy for hosting, Pastor Rod for the service, and Debba and Levi for being his musical accompaniment. There were 117 people in attendance...and a wide variety of critters.

The Lockport US&J celebrates Pat Harrington, the young guitarist from Gasport who was nominated for a Grammy as part of Victor Wainwright's band: 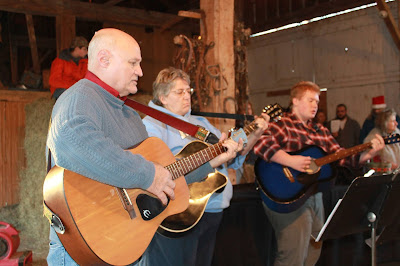 If you'd like to attend an always memorable and cozy Christmas Eve service, head over the old barn at Becker Farms on Monday for a 4:00 service led by Pastor Rod Klinzing of Zion Lutheran Church. It's just over a half hour in length, featuring the scripture of Jesus's birth mixed with holiday songs. It's always an interesting place to reflect on the reason for the season. This picture shows one of the warmer winters -- this one won't be, so be sure to dress for the weather.

If being outdoors in a barn for Christmas Eve isn't your cup of tea, Pastor Rod will be leading indoor services at Zion at 7:00 PM and 11:00 PM Monday.

Hartland Town Park is pretty awesome -- a playground, nature trails, lighted ball diamonds, a gaga ball pit. It gets even more awesome in 2019 when the splash pad goes into operation. Progress is coming along quite nicely. It looks great! 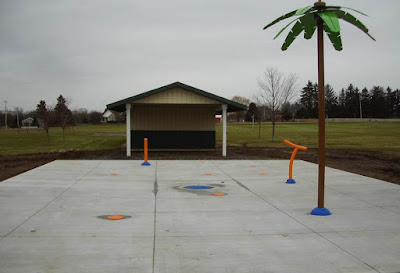 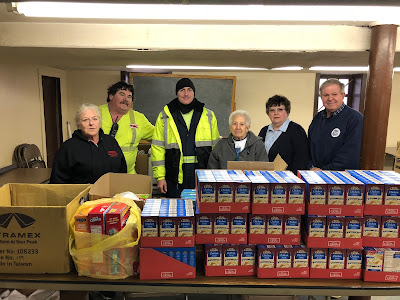 Employees from FMC Corporation’s Agricultural Solutions Plant in Middleport, working with Local 1180 of the International Association of Machinists and Aerospace Workers and plant management, helped to collect and donate more than 600 pounds of food to the Middleport Area Community Food Pantry to assist the local community during the holiday season. Participating in the effort are (from left to right) FMC employees Bonnie Difino, Joe Burkett, and Taylor Kunzelman, and pantry volunteers Rosie Gaughn, Melanie Shuttleworth, and John Shuttleworth.

The Niagara County Sheriff's Office has been awarded a $215,000 grant from the United States Department of Justice's Community Oriented Policing Services (COPS). The grant will assist area schools and the Sheriff's Office in their efforts to prevent school violence.
The grants were offered to assist communities in combating school violence and were geared toward technology upgrades to assist in school security, as well as civilian staff, to assist in this project. The award for Niagara County will include a full time non-sworn staff member to act as the School Violence Prevention Coordinator. The grant was written to build on the partnership the Sheriff's Office has with local schools and will provide technology for the following school districts: Orleans/Niagara BOCES, Barker, Newfane, Royalton-Hartland and Starpoint. In addition, technology will be provided to assist Niagara Charter School with school safety and security.
The School Violence Prevention Coordinator will work with each of these schools to update and implement school safety plans, update site surveys at each of the school buildings and implement the technology acquired through the grant. The Coordinator will also be an active member at each of the schools required safety committees and will provide training to each district as needed in the area of school safety. They will also be a resource for the students in each of these schools and would also act as a liaison between the schools and the Sheriff's Office, as well as other local police departments.
The grant covers a two year period and requires a local match of $72,000, which has been committed by the schools and Niagara County. It will assist Niagara County in ensuring the safety of students throughout the county and the Sheriff's Office hopes to utilize the School Violence Prevention Coordinator in all of the schools in Niagara County if requested. "The program being awarded in Niagara County is a great achievement for local law enforcement and our citizens," commented James R. Voutour, Niagara County Sheriff. "There were only two awards from this grant in New York State and Niagara County received the highest amount. This position and technology will assist in our mission to protect the citizens of Niagara County, especially those in an educational environment". 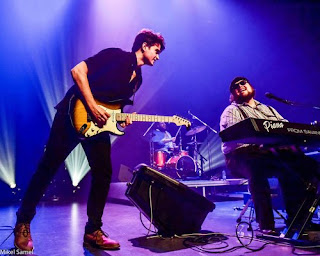 It's not often that Gasport can claim to be home to a Grammy nominee. Victor Wainright and the Train are one of five nominees for Best Contemporary Blues Album. The Train's guitarist is none other than Pat Harrington. Congrats, Pat! 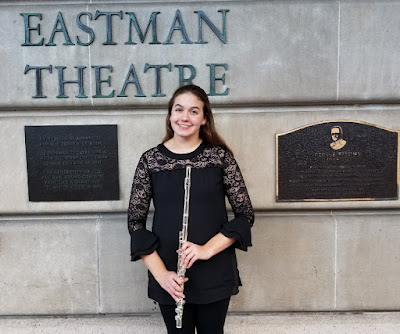 Royalton-Hartland High School junior Madison Ohol was selected to the All-State Symphonic Band. She participated in a concert held at the acclaimed Eastman Theatre in Rochester, NY during the annual Winter Conference of the New York State School Music Association (NYSSMA) held from November 29 – December 2, 2018. Those chosen to participate in an ensemble at this conference represent the best high school musicians from all of New York State as determined by previous NYSSMA solo festival scores and teacher recommendation.

Local resident Jess Keeton contacted Absolut Care in Gasport to see if they had an "Adopt a Senior" program for Christmas. Basically this would entail buying a gift for a senior for Christmas. They got back to her immediately and loved the idea and are welcoming anyone that is interested to join in to make their day more special. The resident Christmas Party is on December 13th. Anyone who would like to join in and "Adopt a Senior" or purchase a gift is more than welcome to. Gifts can be dropped off with a tag that says "to a special someone, friend, etc" and from "your family name" or you can make it anonymous. Jess created a Facebook event so questions can be answered. Kudos to Jess on starting this endeavor!

Congrats to Gasport's Tyler Doty, a St. Joe's senior who has committed to play football at UB, on winning the Trench Trophy, which is awarded to the top two-way lineman in Western New York.

The Gasport Beautification Committee's annual children's Christmas and tree lighting is this coming Sunday, December 9, at Gasport Fire company at 4 PM. Every kid gets to see Santa and take home a toy. There will also be horse and wagon rides around town, a basket raffle, cookies, pizza, crafts, Santa's elves, and singing around the tree at the lighting.

On Sunday, the Hartland Volunteer Fire Company had their annual election of officers for 2019: