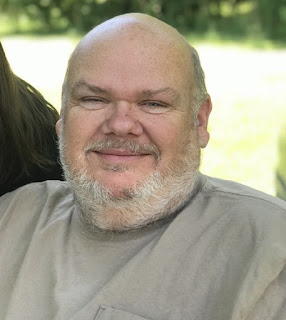 Often silently, giving no warning, but surely relentlessly, deaf to the expressions of human woe, the angel of death flits into our midst and as if mocking our blindness, touches in the stillness of the night one in whom we see no alarming signs of decay. When the morning breaks we are mourning for one dead. Such are today the friends of Jesse R Bieber. He departed this life at 12:04 PM on Wednesday, January 19, 2022, an illness of Covid-19 after only 21 days.

Jesse was born on February 15, 1965, at EJ Myers Hospital, Buffalo. On January 19, 2022 he took his last breath in the same hospital that he took his first breath, currently known as ECMC.

Jesse was blessed with amazing parents. Douglas (deceased) and Mary Jane Bieber.  At the age of 32 Jesse was reunited with his birth father Kenny (Joanne) Parris and predeseased by his step dad, Harold Cleckley.

He leaves behind the love of his life, and as he affectionately calls her, his first wife, of 33 years 2 months and 1 day, Jennifer (Bruning) Bieber along with his two loving children, Joshua Bieber of Middleport and Jolene (Jackie) Bieber of Gasport.

He is also survived by countless nieces, nephews, cousins, aunts and uncles. He was loved by so many dear and cherished friends.  He loved you all!

Jesse loved his family, farming, auctions, his beagle puppy Jack, spending time by the campfire with friends, going to concerts, taking long drives and as he would say he was a “collector of collectibles and treasures” as well as a tractor enthusiast. He had a passion for Town of Royalton history and genealogy. He helped dozens of people find and reunite with their birth families.

He was the Town of Royalton Historian for 16 years. He worked for the Department of Agriculture for 12 years as an enumerator. He loved visiting all the farms around Western New York and enjoyed talking to all the farmers. He was the keeper of the Memories of Royalton, Gasport, and Middleport Facebook page.

He was a member of the Town of Royalton Historical Society, Royalton Planning Board, Trinity Lutheran Church of Wolcottsville, Roy-Hart Agricultural Education Committee, Niagara County 4-H program, Niagara County Farm Bureau, WNY Gas & Steam Engine Association and Chairman of the Royalton Bicentennial Committee.  He was a former member of the Cornell Cooperation Board of Directors.

Jesse was known for his quick wit and sense of humor. He also had a vast knowledge of not only history but of trivia, agriculture and tractors. He was a jack of all trades which was showcased when Jesse and Jennifer built their own home with the help of their amazing family and friends.

Family will receive friends at Bates, Wallace and Heath Funeral Home, Middleport, NY on Tuesday, January 25th.  Hours will be 12-3 with an open casket and a closed casket from 5-8.

We will meet at Trinity Lutheran Church, the red brick church, in Wolcottsville, at high noon on Wednesday, January 26th.  Directly after the service we will proceed to the Wolcottsville fire hall for a Celebration of Life! Please bring your memories and your laughter.  Family and friends will be present at the fire hall until 6:00pm. Casual dress is required at all arrangements, as per Jesse’s request.