The race for the town of Hartland council seats is up in the air. Based on the chart below, most everyone thought the election was decided because it was assumed the two write-ins split the vote of 572.
The Board of Elections has indicated that the 572 are not write-in votes per se....they are BALLOTS that have write-ins. Theoretically, they could have two write-ins each (because it was a "pick two" situation).
This won't be decided until counts of the write-ins begin on the 15th. 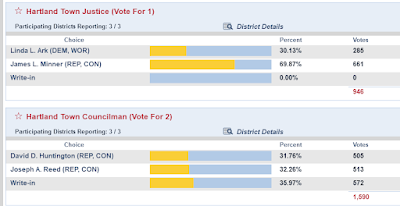