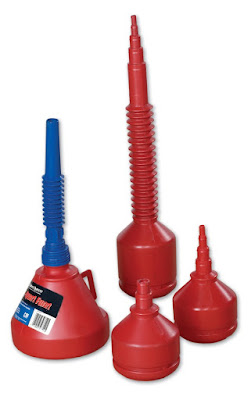 September will mark the 40th anniversary of the patenting of a product invented right here in Gasport by my dad, Doug Confer. His ubiquitous flexible fuel funnel can be found in garages everywhere and it is used to put gasoline, oil, and other compounds into vehicles.

The item was invented in 1975 while the 24 year-old was working on the family farm in Gasport (that in itself is a testament to his and my grandfather's work ethic – they ran a farm AND a factory!).

Back then, funnels were made out of metal that would either corrode or not clean very well. So, Doug thought, why not make them out of plastic at their young plastics company in North Tonawanda? Plastic wouldn’t corrode and leave pieces of metal in fuel tanks, and it would be much cheaper than the metal alternatives.

My dad received his patent in September of 1976 and Confer Plastics made hundreds of thousands of the funnels until the patent expired 14 years later. After that, Mexico and China could make them far cheaper than we could. While we haven’t made any funnels since 1990, it’s a product that helped us grow and it’s pretty neat to see this effective invention in use throughout the world....an invention that came to be on a small farm in Gasport.