ROSSELLI HONORED AS COACH OF THE YEAR 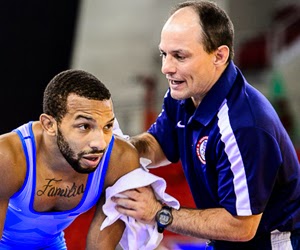 Lou Rosselli (Columbus, Ohio/New York AC) has been named 2013 Freestyle Coach of the Year by USA Wrestling. It is the second time that Rosselli has received this prestigious award, to go along with his award in 2007.

This award is named after the late wrestling legend Terry McCann, a 1960 Olympic champion wrestler. McCann was a long-time coach with the successful Mayor Daley Youth Foundation club, which won numerous national titles in freestyle and Greco-Roman and produced champion athletes for the United States. McCann also served as USA Wrestling President and a FILA Bureau member.

Rosselli is a coach with the New York Athletic Club, and is the head coach at the Ohio Regional Training Center.

He was the personal coach for five 2013 U.S. Freestyle World Team members: Angel Escobedo at 55 kg, Reece Humphrey at 60 kg, Keith Gavin at 84 kg, J.D. Bergman at 96 kg and Tervel Dlagnev at 120 kg. All five train under Rosselli at the Ohio Regional Training Center.

Rosselli was a 2013 U.S. World Team Coach, helping lead the USA to a fifth-place finish, led by individual champion Jordan Burroughs. As coach for the New York Athletic Club, Rosselli helped coach the club to the Div. I Team title at the U.S. Open. At the World Team Trials, the NYAC had two individual champions and placed six athletes on the national team.

Rosselli serves as the Associate Head Coach at The Ohio State University, working on the staff with head coach Tom Ryan and has been with the Buckeyes for seven seasons.

He was a 2012 Olympic coach and helped lead the USA to three individual medalists, champions Jordan Burroughs and Jake Varner and bronze medalist Coleman Scott. The USA was third in the unofficial standings.

He was the assistant coach of the 2005 U.S. World University Games Team, which placed third in the team standings with three individual gold medalists in Izmir, Turkey. He also coached the 2010 U.S. World University Championships team in Torino, Italy. He was also a coach for the U.S. team at the 2009 Pan American Championships. Rosselli has also coached a number of other U.S. teams on international tours.

At Ohio State with Rosselli on staff, the Buckeyes placed second at the 2008 and 2009 NCAA Championships as a team. He was named 2009 NWCA Assistant Coach of the Year.

Previously, he served 11 seasons as an assistant coach at Edinboro Univ., eight years as a full-time assistant and three years as a volunteer assistant. Rosselli has helped build the Scotsmen into a nationally competitive program on the Div. I level.

Rosselli placed third at the 1993 NCAA Championships and was fourth in the 1991 NCAA Championships for Edinboro Univ. A native of Middleport, N.Y., Rosselli was a two-time New York state champion at Royalton-Hartland High School, in addition to finishing second once and third once.