Gerry Reynolds was an asset to the town of Royalton, having been such an ardent supporter of historical efforts in our community that she remained as the editor of the Historical Society's newsletter well into her late-90s!

She was an amazing woman and will be missed. 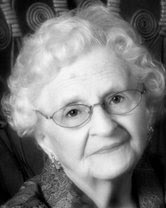 Geraldine C. Rademaker Reynolds of Lockport, NY, went to be with the Lord on Monday,  June 16, 2014.

Born November 12, 1911 on Church St. in Middleport to George W. and Ida Lindke Coon. Gerry attended Middleport Elementary and High School for 12 years and was valedictorian of the class of 1929. She graduated from Bryant & Stratton Business College and was a medical secretary to Dr. Louis C. Kress, third Director of Roswell, also surgeon and author of "The Truth About Cancer," naming signs of cancer and urging early diagnosis.

Gerry assisted her husband, Carl, in his pipe organ business for over 40 years in their home office and at times "on the job". He had maintenance and rebuilding contracts locally, in the southern tier and central New York churches. Carl and Gerry enjoyed traveling and were active in the Avion Travel Club for several years.

Gerry was a member of the Town of Royalton Historical Society since its inception in 1977, and editor of their Royalton Reflections Newsletter from 1982 to 2010. She was also a member of the Lockport Theater Organ Society for 20 years, serving as president for two years and secretary for several years.

A memorial service will be held on Saturday, June 21, 2014, at 11:00 AM at Christ Episcopal Church, 7145 Fieldcrest Dr., Lockport. Flowers gratefully declined. Memorials may be made to the church or Town of Royalton Historical Society, 5316 Royalton Center Rd., Middleport, NY 14105. Interment in Hartland Central Cemetery. Arrangements by LANGE FUNERAL HOME, INC.

Condolences may be offered to the family at www.langefuneralhomeinc.com.