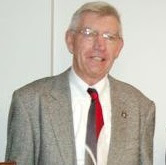 Take a drive out by the Royalton Town Hall and you will see some windmills in operation. These new additions to town property were spearheaded by town supervisor Dick Lang. For the October interview we sit down with Mr. Lang to discuss the nuances of this project -- the first of its kind in Western New York government -- and what it means for our community....

What (or who) inspired this project?

In February of 2010 Mr. Thomas Fleckenstein of Niagara Falls, came into my office and informed me of the possibility that Royalton would eligible for a Renewable Energy Improvement Project and the funding would be from Municipalities American Recovery and Reinvestment Act.

What was the cost of the project and where did the money come from?

This was money from President Obama’s stimulus package. It was suggested that we join the Climate Registry, out of Los Angeles, California. This was our only expense, that amount being $450.00, giving the town 5 extra points in its bid process.

This is the only money the town has invested.

After the town's application was excepted, it was given to NYSERDA to administer. The process was completed on October 7th 2011 with the 4th tower completed.

How much power do they provide?


The intent of this project is to install 20KW of renewable wind energy to offset the cost of electrical service currently being supplied by the grid. The installation would reduce our Green House Gas emissions by 301 tons of CO2 over the 25 year life span of the project.


What are the estimated savings?

What sort of maintenance and upkeep will be involved with the system?

Are there any plans for other green energy projects for the town's various operations?


At this time we have no plans for more green energy projects. But there has been a new law signed by Governor Cuomo called remote net metering, where we can generate the power at this location and have it deducted off our utility bill at the sewer/water building on Bolton Road.