If you're driving down Route 31 today and you wonder who's dumb enough to be playing football when it's below-freezing outside...it's just me and my friends. 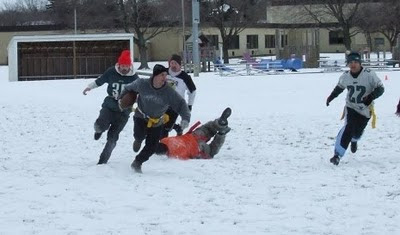 Every December since 1992 I've hosted a football game that has become an over-hyped event to the participants. The guys always look forward to Mudbowl and getting to play football for what may be their only chance each year. They also value the bragging rights that come with victory and big plays.

In 2005 it became a flag football game because, quite frankly, we're getting too old for tackle. But, nonetheless, it remains exciting.

This year's Mudbowl -- the 18th installment -- takes place this Saturday, the 19th, at noon at the soccer field at the Gasport school.