Brauer is Advisor of the Year! 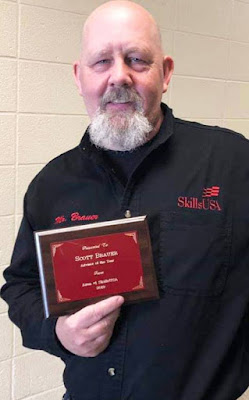 A huge and much deserved congratulations to Orleans/Niagara BOCES’ Project Based Engineering teacher, Scott Brauer. Scott, who teaches at the Niagara Career and Technical Education Center, has been named the SkillsUSA New York Area 1 Advisor of the Year!

SkillsUSA is a partnership of students, teachers and industry working together to ensure America has a skilled workforce.

His journey began when he was a junior in high school and attending BOCES. He says being a member of SkillsUSA gave him direction, purpose and focus. It is one of the reasons he decided to become a career and technical education teacher at the same center he attended and become a SkillsUSA advisor himself. “I just want others to experience what I was able to experience as a student. SkillsUSA is life changing!”

Scott has been a SkillsUSA advisor for 28 years. He has been the lead advisor at the Niagara Career and Technical Education Center for the past 12 years and believes in order to be a great advisor you have to become involved through ardent practice, gathering of information and networking. He trains others not to do things for the young people, but to assist them on their journey. He coordinates all the competitions that the center participates in at the regional, state and national levels. He is also the contest chair for Advanced Manufacturing Technology, CNC and Machining contests at the regional level. His class has been recognized by the NYS Education Department as a Top Career and Technical Education Program in New York State.

He was nominated by his peers across the Area 1 division. One nominator says, “Young people are always the center of Scott’s decisions and plans. He is forever mindful of any action’s impact on the individual or the group. He is always moving forward, taking others with him into the future and the world beyond his classroom.” His nomination also says, “Scott is known for many things: his generosity, his selflessness, his devotion to his wife and family, his belief in God, his role as a teacher and mentor, his love for his students and young people, his work ethic, his love of everything outdoors and his involvement with SkillsUSA.”